Follow-up to “Don’t We Never Learn?” Part I: Trouble in Tahiti

Academy for the Love of Learning Founder and President Aaron Stern shared this letter with participants after the first of our 20th anniversary offerings held on April 29th, “Don’t We Never Learn?” Part I: Trouble in Tahiti.

It was a great joy to be with you this past Sunday night at “Don’t We Never Learn?” Part I: Trouble in Tahiti. I sincerely hope that the evening brought you heartfelt insight, connection and learning with fellow travelers. It was deeply moving to me to be able to share Lenny’s opera and spend time with you.

Upon reflection, I want to offer some thoughts growing out of our discussion. In particular, I want to highlight the word “awareness,” which was named during our group debrief as a significant capacity that has come more fully into view, and explored increasingly, since 1951 when Bernstein wrote Trouble in Tahiti.

Awareness is central to all of our work at the Academy. It is in fact embedded formally in our learning practice. To illustrate this, I have attached a copy of the diagram of the Academy’s Learning Practice, which I pointed to a couple of times during our evening together. In all of our work, our aim is to cultivate the human capacity for what I call “Awareness in Action:” the human capacity to notice the impact of our actions and adjust our actions, in relation to how we intend to be in this world. 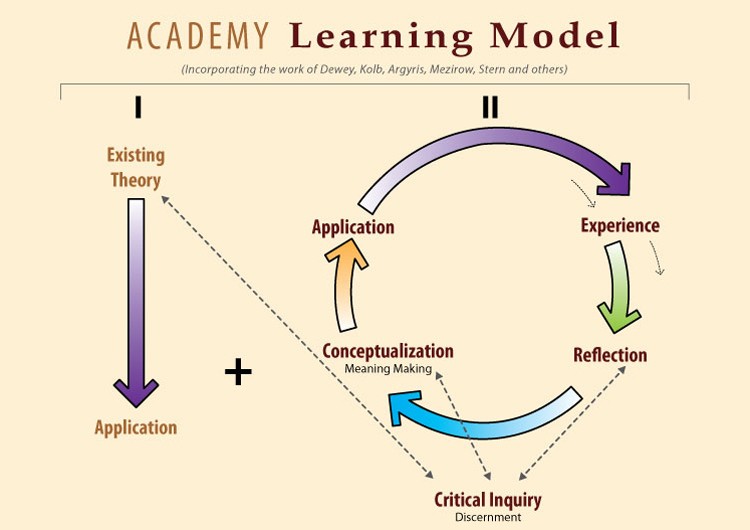 Our special focus on “Awareness in Action” is precisely what caught the attention of the renowned neuroscientist Dr. Richard Davidson and his team from the Center for Healthy Minds at the University of Wisconsin-Madison. They identified this focus as pioneering work worthy of substantial study. Throughout 2017, Richie, as I know him, along with Dr. Robin Goldman, CHM’s chief scientific officer, led a team, in partnership with us, in a major study of our work. Our hope at the Academy was to validate, more objectively, our belief and considerable anecdotal evidence that there is a clear link between the transformative learning experiences at the heart of our work at the Academy and human flourishing. Though the studies are still underway, it is looking as if we are indeed right! The way I like to say it is, “if we take the lid off learning, we will learn ourselves to a better world, individually and collectively.”

Richie and I both are quite engaged with His Holiness the Dalai Lama and his Mind and Life Institute. We share a deep abiding devotion to well-being and a global vision for transformation. Increasingly, the Academy has the opportunity to bring our important work to this table. Just recently, I traveled to the home of His Holiness the Dalai Lama, in Dharamsala, India to present in and moderate an intimate dialogue (live-streamed worldwide!) on the topic of “Reimagining Human Flourishing.” This, as we simultaneously continue implementing the work I was talking about in India in our beloved Santa Fe community. Indeed, we are thinking globally and acting locally.

In writing to you, I also wanted to remind you of the themes I put up on the screen Sunday evening as a prelude to our group debrief: Romantic Love; Liberation; Psychology; Suffering/ Brokenness; Delusion; Patriarchy; Gender; Religion; Materialism; Competition; Colonialism; Race; Family; Systems; Learning/Waking up!

And, I wanted also to offer you a new list I compiled since our Sunday evening gathering – examples of what I would call signs of hope that we do learn and that a new time is arriving, perhaps a “great turning,” as Joanna Macy calls it – even while we are in the midst of this great unraveling. There are signs of intelligent life in the universe, particularly our universe, all of which have emerged since Trouble in Tahiti was written in 1951!

I hope you will take the time to ponder these remarkable signs of life and note how and when they show up in your life. And, how recent many of them are!

Please remember, we invite you to join us as we take the next step in our inquiry into “Don’t We Never Learn?” Part II: Learning and Transformation, where Richie Davidson and I will be in an illuminating dialogue focused on what we are learning about the transformative impact of the Academy’s work. This second of our anniversary offerings will be held here at the Academy on May 20th from 4-6 p.m. I remind you to look for these examples of the world “waking up” and “Awareness in Action.” We will continue to explore and highlight the human capacity to learn and wake up through our upcoming anniversary events. Your presence at the Academy truly matters.