For the Love of Learning: Meeting the Pope

A few weeks ago I was invited to speak to a wonderful group of engaged and progressive Santa Fe citizens. They call themselves Journey Santa Fe and they meet weekly at one of our lovely independent bookstores Collected Works.

The title of my talk was Bernstein Stories: Poignant and playful stories from the last decade of Leonard Bernstein’s life. As many of you know, I co-conceived of the Academy with my mentor and dear friend, Leonard Bernstein. In the final ten years of Lenny’s life, we traveled and worked together often peripatetically, throughout the world, exploring how learning can be understood as a practice that has the potential for waking us up, and, how the arts can become a tool for transforming the way we learn and our approaches to education. That time eventually gave life to the Academy for the Love of Learning, which I later went on to found, and all of its work in education, community arts, and story-telling.

It was a beautiful sharing with many people approaching me during and afterward with their own “Bernstein Stories.” You can listen to the talk here:

For the last several years I have been finding time here and there in my busy schedule to write down some of the stories of my life in learning. My hope is that very soon these stories will be published in book form as a way in to understanding MY love of learning and how I came to be doing what is mine to do. At the Journey Santa Fe lecture I spoke a story about meeting Pope John Paul II while travelling in Italy with Bernstein. It was among the stories I had already written down and I would love to share it with you all here as a preview of some of the poignant and poetic stories I hope to share with you in the future.

Excerpt from “For the Love of Learning” by Aaron Stern

Sometimes my mind did wander during Lenny’s unbounded digressions and continuous stream of stories, fascinating though they were. He talked incessantly – and quite incredibly, nearly always about himself!

Most of the time it was impossible to get a word in edgewise. It could get tiring, despite his extraordinary life. And it certainly could become deeply frustrating, given that I too had a few things I needed to say about my own unfolding story – not to mention the work I was doing envisioning the Academy for the Love of Learning.

Occasionally during his frenzied story telling sessions, in a blessed moment of self-consciousness, Lenny would suddenly hear the non-stop droning of his own voice echoing back into his own ear and abruptly interrupt his monologue: “But I’ve said enough already about me!!” he would blurt out, and then would add, with barely a breath, “What do you think about me??”

This usually provided comic relief, instantly neutralizing the mounting tension, replacing it with the roar of laughter. But then, hardly pausing to regroup, he would continue his monologue.

There’s a wonderful story that illustrates how Lenny could dominate a conversation with anyone! In 1985, I joined Lenny on a visit to the Vatican where he was to perform for Pope John Paul II and the Pope’s invited guests, at a private (though televised world-wide!) gathering. The concert took place in the Salle Regia (Regal Room), the room immediately adjoining the beautiful Sistine Chapel. Lenny was set to perform Beethoven’s Leonora Overture #3 from Fidelio, his Eroica Symphony and Lenny’s own prophetic Jeremiah Symphony, his 1st Symphony.

During the rehearsals, and right from my seat during the performances, I could easily look over into the Sistine Chapel room and see Michelangelo’s masterpiece stretching across the ceiling. In the forefront was the painter’s very own rendition of Jeremiah, providing visual accompaniment to Lenny’s deeply moving symphony. It was a triple whammy in fact – three masterpieces present at once – the original Old Testament story of Jeremiah as the inspiration, resurrected and rendered in Michelangelo’s magnificent mural, and then resurrected as a musicalized version in Bernstein’s symphony. It was like a hall of mirrors, its amplified message piercing all the way to the soul, impossible to escape its impact.

Earlier that week, during rehearsals, Lenny and I had been invited to climb the scaffolding that had been erected for the Sistine Chapel’s ceiling-restoration project, for a more intimate view of the masterpiece. We lay down and spent some hours there, lost in the cosmos, examining the ceiling up close, reverent and in awe of its extraordinary beauty.

As it turned out, the Pope was unable to attend his own private concert because of a last minute schedule glitch. As a consolation, Lenny was unexpectedly summoned the next day to a private audience with the Pope. Lenny insisted that I accompany him. “This will be an important experience for you” he beckoned me.

So, we both put on funny, Bar Mitzvah-like suits – Lenny, with his cowboy boots. Entering through a private entrance to the Vatican, we wended our way in a limousine spiraling upward around a curvy driveway rising high to the Pope’s private quarters. Along the way, I excitedly asked Lenny for guidance. After all, meeting Popes and Presidents was, by then, old hat for him. “I have questions to ask him, is that OK?” I asked on the way. “Or, do we just listen and not talk? What exactly is the protocol? Do people really kiss his ring?” I asked half jokingly.

Lenny’s response was simple and swift: “We let him do all the talking. After all, he’s the Pope! We should just listen and be courteous and hear what he has to say.” So, I prepared myself to be quite attentive and mute. I should have known better!

We entered through a special door and walked through a long hallway laden in gold, passing walls covered by magnificent Raphael paintings. We passed a doorway through which we could see the Pope, enthroned, sitting in audience with what looked to be a hundred or so people. We then entered into a private office and waited with the Pope’s secretary for the Pope’s arrival.

Soon he arrived and greeted us. Speaking in clear deliberate English, he welcomed us, graciously. Immediately he apologized for having missed the concert. Without a breath, Lenny responded, nearly interrupting, speaking in Latin! The Pope, though famous for his linguistic capabilities, was a bit taken aback. He answered, speaking again in English. Deftly, Lenny shifted to Italian, this time with a question. The Pope, a bit confused, and maybe even a bit annoyed, capitulated and answered in Italian. But Lenny then shifted to Spanish, and continued to speak. Only this time, it turned into one of his famous monologues – a multi-lingual one, at that.

After a time, The Pope, nodding his head, a bit bewildered and no longer trying to get a word in, looked over at me, shrugged his shoulders and extended a hand with a commemorative medallion. The Pope gave him one too and we said our goodbyes. 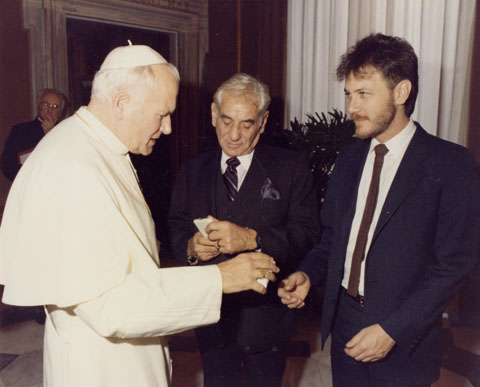 On the way back in the limo, I lambasted Lenny because of his endless monologue and especially his counsel to me not to speak! “I wanted to hear what the Pope had to say – and in English! Not you!” Lenny, of course, insisted I was exaggerating and denied the whole thing had happened that way!

Over the years, Lenny hated it when I told this story, insisting that it wasn’t like that at all! Of course, one need only look at the photos of that meeting to see the bewildered look on the Pope’s face to know the real story!