As the 5th anniversary of the devastating fire that destroyed Seton Castle approaches, I’ve been reflecting and wanted to share my thoughts. For many of our friends, this story is probably familiar, while for some of our newer friends, perhaps not.

When the Academy purchased Seton Castle in the spring of 2003, it came with the surrounding 86 acres of land (the last remaining of what had been Seton’s 2500 acres). We immediately began the process of restoring the Castle and renewing the land.

The Castle itself was in a state of near collapse. The land was littered with garbage. We went to work on many fronts simultaneously. With the help of volunteers from Seton Village and elsewhere in the area, we immediately began to archive and remove the important contents of the building, much of it damaged and mold-ridden, and we placed it in secure storage to protect it from 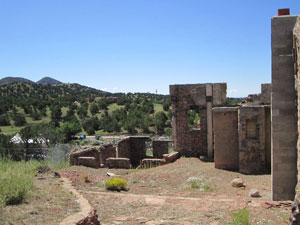 further damage. We began picking up and removing what became some 300,000+ pounds of garbage from the land, with the help of many volunteers; we hired Spears Architects, well known experts in restoration work, to create the plans for the restoration of the building, faithful to its original design; and, in the meantime, we immediately placed and emptied continuously, countless big white buckets throughout the building to catch the incoming rain, to prevent further water damage!

Some two and a half years later, after tens of thousands of hours upon hours of devoted work by us all, the beautiful Seton Castle restoration, designed and executed by our wonderful partners Spears Architects, and Wolf Corp Construction Company, was nearly complete, when the fire hit.

We were utterly stunned and devastated by the fire. It was as if we had all been traveling at 100 miles an hour toward a destination – and the destination suddenly vanished. We were in shock. The Castle was to have become our new home.

The fire erupted on November 15, 2005, at about noon, on a brilliant blue-skied, chilly and windy autumn day. There were construction crews all over the building, including on the roof. It was a true blessing that no one was injured. It could have been a far greater disaster. As the fire began, just across the way, inside the home of a Seton Villager, a group from the Seton Village community and the Academy were together planning the opening celebratory event for the re-opening of the Castle.

I called Dee Seton, Seton’s daughter, then living in Tennessee, immediately upon learning of the fire. She had already heard the news. She calmed me by saying “You have done everything right, Aaron. This was somehow meant to happen. You must let the Castle go now. Just keep Seton’s work alive however you can. You have done everything right…” I wrote down her words as she spoke them – I have them to this day and can still hear her voice.

We were immensely saddened by the loss of the Castle. Even now, as I look up on the hill – I am heartbroken. Even though we will soon have a beautiful new home into which we will move, which, in some important ways, will ultimately serve our needs better – I am still most deeply touched by the Castle. That would have been my choice for our home, hands down. Nevertheless, our educational work must continue, in earnest. The world of education and learning are in crisis. There is much work to be done. And that is our mission.

After the fire, Spears Architects spent nearly a year working with us to design plans for rebuilding the Castle. That was our deepest wish. But in the end it was not feasible. There had been too much destruction, and we learned that we would have had to take down all of the remains, even though some were still intact, and start completely anew. We did not want to lose those portions of the Castle that were still intact. Plus, the various, numerous safety and code requirements would have meant significant changes to the actual footprint of the building, extending it well beyond its existing physical boundaries. It would have seriously encroached upon our neighbors, which we did not want to happen. 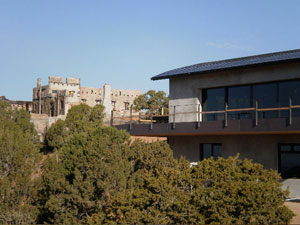 Having exhausted the possibility of rebuilding the Castle, we turned our attention to building something new, something that would combine today’s knowledge and technology with Seton’s wise recognition of our need to attend to the environment and nature. We are extremely proud of what we have built and accomplished and see it as deeply resonant with Seton’s own original vision.

And we are indeed keeping Seton’s work alive as we promised to his daughter and our friend, Dee Seton: In 2011 we mounted the remarkable exhibit Wild at Heart, about Seton and his life, at the New Mexico History Museum in Santa Fe; we have seen to the restoration and preservation of many of his paintings and drawings, and they are on view in a dedicated gallery space on the Academy campus. We supported the writing of the extraordinary book on Seton’s life and work, we are holding Seton-related events at the castle site and in the gallery, we will be maintaining and making available to the public the Seton archives, and we are creating beautiful, respectful contemplative gardens surrounding the Castle remains as a tribute both to Seton and to his daughter, Dee.

For the Castle remains themselves, the respectful plan, completed in the spring of 2011, allows our neighbors and visitors to the site to see once again, the rustic, eclectic, façade much as it was long ago when first built by Seton. We have been in conversation with our Seton Village neighbors all along our way and have felt blessed and deeply grateful to have their friendship and support for this plan and all our plans for our new home.

If you would like to come for a visit to see the Academy campus and Seton Castle please check our calendar for our next event and Seton Gallery open hours or be in touch with Marissa Roybal to book a private tour.