Visionary Theologian, Matthew Fox, Joins The Academy for the Love of Learning As Visiting Scholar 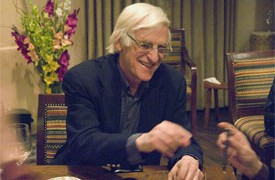 Matthew Fox signing books
We are pleased to have theological scholar and author, Matthew Fox, as the Academy’s visiting scholar. Matthew took on his role in August, 2007, and participates in the development of several of the Academy’s programs. He is also a founding member of the Academy’s Council of Elders. Matthew will continue his growing involvement in Academy-related public presentations and trainings associated with teacher renewal and the re-imagining of education.

Matthew, who is best known for his renewal of the ancient tradition of feminine-centered Creation Spirituality, was forced to leave the Dominican Order after 34 years of priesthood. Founder of Wisdom University in Oakland, California, he is a prolific writer. His most recent book, The A.W.E. Project: Reinventing Education, Reinventing the Human, has led him into an increased engagement with issues impacting the education of children.

Aaron Stern, founder and president of the Academy for the Love of Learning, and a visionary educator in his own right, is enthusiastic about Fox’s role with the Academy. “Matt is a true visionary and we are graced by his presence in the work of the Academy. I first encountered his pioneering work in the early 1980s when my mentor Leonard Bernstein and I read and explored Matt’s book Original Blessing. Matt’s words touched us deeply, affirming some of our own discoveries and beliefs, and we became instant fans. I am delighted to be collaborating with Matt and look forward with enthusiasm to what will unfold.” 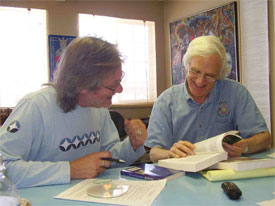 Aaron Stern and Matthew Fox
The Academy for the Love of Learning was conceived by Aaron Stern and Leonard Bernstein. Mr. Stern later went on to found the Academy after Mr. Bernstein’s death. The work of the Academy focuses on the re-imagination of education and the creation of a culture of learning engendering a new philosophy and system of education that values the whole human being. Working with adults who are directly concerned with the lives of children and who can bring an influence to their education, the programs of the Academy range from a two-year leadership training, teacher renewal, and the development of new schools, to organizational advisory services. Several additional programs are currently in the planning stage; these include a leadership program for young adults, a parenting institute, and a masters-level teacher-training program.

“The over-riding goal in all our programs,” says Stern, “is to activate an orientation to learning as a life-long, whole human being practice. Learning, as a practice. Whether we’re teaching, parenting, or heading up a social benefit organization, we are all leaders and, therefore, it is who we are as human beings – our capacity to love and stay as fully awake in our humanity as imaginable with ourselves and each other – that is of the greatest importance. This is the road to dignity and freedom.” 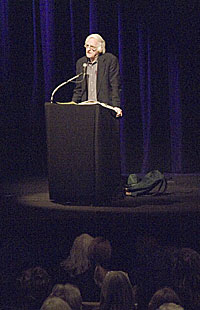 mments on learning and education:
“Our culture is so anthropocentric and thinks so small. This is where creativity comes in. It flows from underground wells and passages, and mysterious places, and it keeps flowing. It’s about being part of something bigger than all of us. We must educate the soul, not just the mind. The mind is busy. But the soul can take you beyond mind, and you need both. Obviously, you need to explore mind and train mind, but we also want to explore what’s beyond mind. And there’s no room for that in most educational systems today. What we’re calling education banishes the soul. You can’t even use the word soul.

Creativity must be at the heart of learning. Creativity is what grows the soul. And it also makes demands. It requires the warrior — it requires self-discipline, it requires strength, it requires…going into darkness and into doubt and into the breakdown of things, and disintegration and rebirth. Part of honoring creativity and learning is to recognize that there are highs and lows. But learning does have to have a purpose. Just like art isn’t for art’s sake, it’s for the community’s sake. It’s the same with learning. It’s not for ego, and it’s not for just a better paycheck — though that is obviously a spin-off — but it is about our citizenship on the planet and our role in the relationship of things.

Our education is set up only for knowledge, and that’s part of what we have to break out of. We have to break into wisdom. That’s why the arts are so important. Creative practices open the door to wisdom. What we’re talking about is moving from knowledge-based education to wisdom-based — from “knowledge factories” to wisdom schools”. That’s why I love the Academy’s exploration of learning as a practice. In the modern age we have stripped the heart from knowledge so much that learning has become something else. But when you reintegrate them, it is the pursuit of wisdom.” 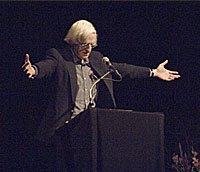 Aaron Stern and Matthew Fox agree that a new form for education must address the child’s soul in addition to teaching the things we currently think of as education.
In a conversation with Matthew, Aaron said: “Rather than the balance tipping toward basic skills and testing, if we begin to tip it the other way and say, ‘OK, a new form of education is one that tends to the soul, and learning is a practice that supports that,’ what would that mean? What would become possible in a world in which a child’s education is surrounded by love rather than anxiety or fear?”

The Academy for the Love of Learning has immersed itself deeply in the question of what is a right education for children: What forms can education take to serve future generations as they inherit a world of ever more formidable complexity? As the Visiting Scholar, Matthew Fox adds another dimension to this conversation, and joins Aaron Stern and others in bringing the inquiry increasingly into public arenas.