Lessons from the Garden: The Benefits of Diversity and How to Build Resilience

It’s eight o’clock in the morning, and I must get to the Academy garden while the irrigation is still running so I can make sure it’s hitting its targets. We have been in a long dry spell since Easter, and it’s the fourth of July holiday. But the garden doesn’t know holidays; it requires constant attention, optimally two to three times per day.

I ride my bike a half mile up the hill. First, I survey whether or not deer or mice have taken advantage of the young vegetables and fruits in the castle garden. They feel the drought too, and are attracted to the fresh, irrigated greens. But the plantings are fortressed inside wire cages, safe from the chomping of deer. The cilantro that self-seeded all around seems to deter the mice. A half hour of weeding while the ground is moist, and I head down to the other garden.

Some of the plants in the kitchen garden require hand-watering while it’s cool. So, I fill the water can and attend to three tomato plants, onions, carrots, arugula, cosmos, chard and strawberries. The strawberries have had a tough go due to me digging out the mint all around them. Note: Never plant mint outside a pot unless you want it everywhere!

As I wet the soil, I greet a dozen or so wasps that helicopter down. Their nest must be nearby, perhaps inside the honeysuckle vines that line the high wall enclosing the kitchen courtyard. They are teachers of coexistence and bring huge benefits. It is estimated that in a 2,000 square foot garden they can remove more than two pounds of pesky insects like caterpillars to feed their colony. And those services are free.

Now, it’s back to the castle garden. Some of the cilantro has grown too tall and is preventing sunlight from reaching young tomato and pepper plants. With a five-gallon bucket and pruning shears, I start clipping, first around the green beans, then over to the tomatoes, peppers and cantaloupe. Some of the crowns of cilantro have ladybugs, which I carefully transport onto the vegetables.

Once my bucket is full, I carry it to the compost at the top of the hill. Scraping aside loose straw, I dig a hole into the rich black gold, wriggling with worms. Salad! The waxy, lemony herb gets mixed with the dark soil, then covered up with straw to keep it cool. I pull up the irrigation line that waters wild sunflowers in the swale below, alternating every few days between the two until the monsoons begin. Soon, the sunflowers will attract American goldfinches, or in Spanish, Yanqui jilguero (yes, Yanqui is Yankee), as I just learned from our groundskeeper Luís.

Looking down to the castle garden, I can see the stately splendor of the mammoth sunflowers along the west end of the wall, some already five feet tall. Moving east are Luís’s cucumbers and then corn, some stalks nearly six feet tall. In the row of beans volunteer watermelon, squash and cantaloupe sprawl out to meet the bright purple wild verbena.

Two hours have passed, and each visit reveals more to do. The plants and animals have conspired to build an interdependence with me, reminding me to live in the present, receive their humble generosity, and help them along so they can contribute to our health and resilience while propagating their species. Our relationship requires slowing down, sharing, embracing diversity and accepting both surprise and disappointment. Most importantly, I am reminded that we are of and not above nature. 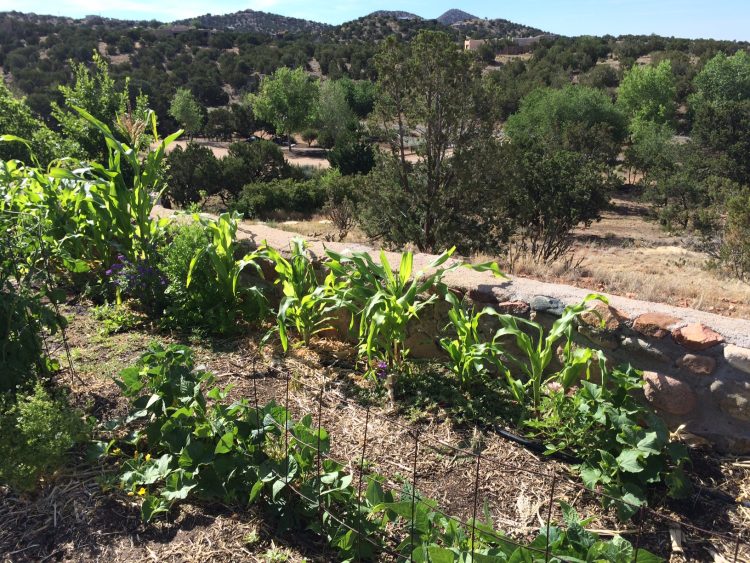