Annual Seton Birthday Celebration
The Academy for the Love of Learning celebrates its annual Seton birthday event with the opening of a new art exhibition in the Seton Gallery on Sunday afternoon, August 13th. This event is held each year in honor of Ernest Thompson Seton’s birthday. He was born 157 years ago in 1860.
Special Guests: Dancing Earth™ Indigenous Contemporary Dance Creations

The Academy for the Love of Learning celebrates its annual Seton birthday event with the opening of a new art exhibition in the Seton Gallery on Sunday afternoon, August 13th. This event is held each year in honor of Ernest Thompson Seton’s birthday. He was born 157 years ago in 1860.

Seton, a sixteen year resident of Santa Fe until his death in 1946, created the euphonious “Seton Village” south of the Old Las Vegas Highway on County Road 58 (“Seton Village Road”) about twenty minutes from downtown. The public is cordially invited to the reception.

About the Exhibition
In 1932, renowned Kiowa artist Jack Hokeah (ca. 1901—1969) received a commission to paint 12 murals in a building used as part of Seton’s leadership institute. The new show, “echoes” documents in photographs what turned out to be ephemeral work by Hokeah. The building in which the paintings were housed eventually collapsed leaving no more than a few remaining fragments.

According to Seton Legacy Curator David L. Witt, “Hokeah created murals depicting spiritual aspects of Native culture. Over time, due to weathering, these paintings have largely disappeared. Just enough remains that we can imagine what the experience of seeing them whole might have been like. For me, they are visual echoes of something that was wonderful at their creation, and which remain wonderful in their leaving this world. The inherent beauty of the paintings comes out through this exhibition.”

This year’s event will be made more special by the presence of the creative presence of Dancing Earth™ Indigenous Contemporary Dance Creations who will be in residence at the Academy for the Love of Learning during mid-August. They will give a special presentation on August 13th near the end of the afternoon.

More about the murals
Eighty-five years ago, in 1932, Ernest Thompson Seton built a ceremonial structure at Seton Village outside of Santa Fe, New Mexico. Named the “Hogan” for its resemblance to traditional homes of the Navajo Nation, the multi-sided building housed a remarkable series of paintings.

Seton commissioned renowned Kiowa painter Jack Hokeah to paint twelve large murals directly on the interior plaster of the building. Hokeah (ca. 1901-1969) was an artist of 14 years experience, an exhibitor with the “Kiowa Six” group, and an exemplar of the “Modern” movement in Native American art. Having just completed an important project at the Santa Fe Indian School, he moved on to the commission at Seton Village.

Hokeah worked in the “studio style” which featured flat color fields with little sense of depth. The images he chose to create were carefully drawn representations of the ceremonial and mythological life of Native peoples.

Unfortunately the roof above the paintings proved inadequate, eventually water leaked onto the paintings and later, the roof gave way entirely. Over many years damage to the images accumulated until little remained.

By 2003 when the Academy for the Love of Learning acquired the Seton property, the building was a ruin and its paintings beyond repair. The question facing the new stewards of the property was how to show respect to a place that held spiritual value to Seton and his followers.

After years of discussion, in 2017 the Academy began a process of saying goodbye to the paintings and to the building. There is a feeling of loss but also of renewal. The paintings are gradually becoming invisible to us while at the same time transforming into a new order as they return to the earth.

More about Jack Hokeah
Born in Oklahoma around 1901, Hokeah, an accomplished singer, painter and traditional dancer, is now best remembered as a member of a small group of associated artists from the Kiowa tribe active during the 1930s. That group was known as the “Kiowa Five,” (and sometimes as the Kiowa Six: there were six members of the group, but only five at any one time). They exhibited nationally and internationally during their time together and have, as individuals, maintained their popularity among Indian art enthusiasts.

Hokeah’s connection to New Mexico began as early as 1930 when he took part in the Inter-Tribal Indian Ceremonials at Gallup where he met and became lifelong friends with San Illdefonso Pueblo potter Maria Martinez. He painted murals for the Santa Fe Indian School in 1932, perhaps before creating the works in Seton’s “Hogan.” In September of that year he became affiliated with “The Studio School,” an open-studio project for Native artists organized by art teacher Dorothy Dunn in Santa Fe. The Studio included art instruction although its larger importance came from providing a nurturing, creative space for artists.

Curator Note by David L. Witt: Inspired in part by Dunn, but also by earlier Native art including traditional pictorial drawing on animal hides, and so-called “Ledger art,” on paper, the “Modern” movement of which Hokeah was a part featured carefully drawn representations of the ceremonial and mythological life of Native peoples. This “studio style” featured flat color fields with little or any perspective, de-emphasizing three-dimensionality and depth, historically critical components of European painting. This approach, often using water-based media, came to epitomize “Indian” painting of the 1930s. It was both extremely limiting and immediately recognizable, and subsequently has received praise for its unique view, and criticism for being too influenced by white teachers.

More about Dancing Earth
DANCING EARTH—an award winning Indigenous contemporary dance initiative—comes to the Academy for the Love of Learning this summer for their sixth annual Summer Institute. Artistic Director Rulan Tangen was recently selected as a top ten finalist across all disciplines for the Nathan Cummings award for Social Change.

She has handpicked 12 international Indigenous cultural artist ambassadors from First Nations of USA, Canada, Australia, Haiti, Guatemala, and Samoa for the Summer Institute. They will be in motion 12 hours a day, with cultural exchange, decolonized movement practices, and recognition of the land around the Academy as historically Indigenous space—honoring and revitalizing the legacy of Ernest Thompson Seton and the deep inspiration he found in Native culture.

In recent years the Summer Institute has explored Indigenous perspectives on water, seeds, and Indigenous food sovereignty through embodied knowledge. This year’s theme is renewable energy from spiritual cultural source points. Locations around the Academy include crumbling structures with remnants of historic paintings of dancers by a Native artist. In the spirit of reciprocity, Dancing Earth will revisit and renew these images, translating from the earthpaint into the Dancing Earth living expressions, bringing Indigenized breath of life into the body of creative knowledge that is growing at the Academy. Guests at the annual celebration will witness Dancing Earth artists in creative process during their daily “land dance” practice, then will be invited to gather for the culminating offering of danceworks in progress.

For more on Dancing Earth, see: 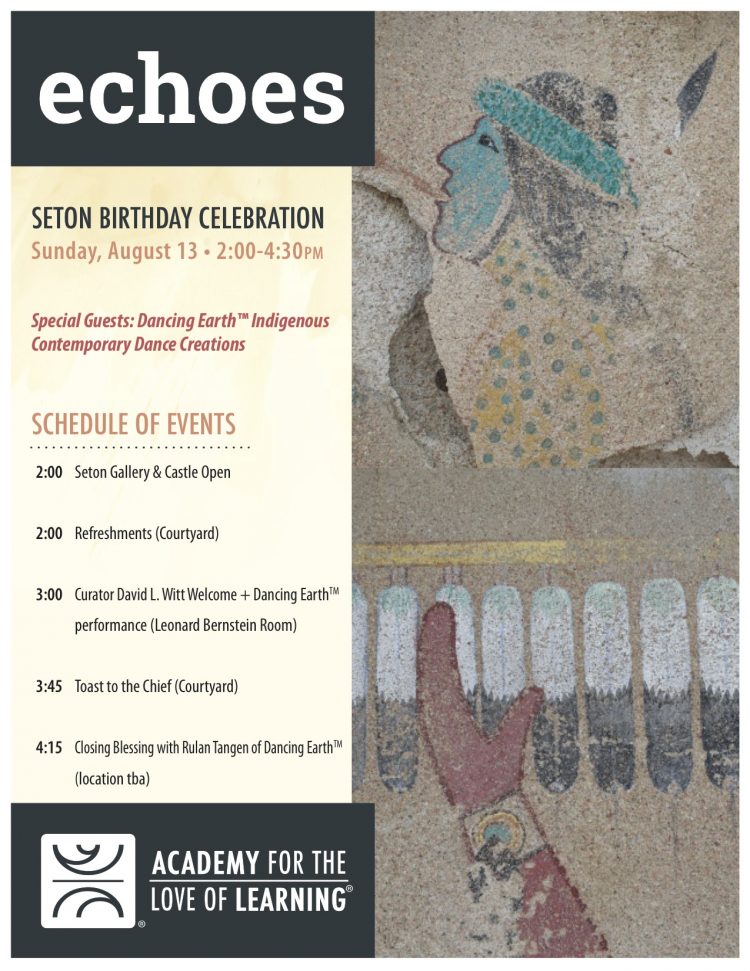 To learn more about Echoes use the form below to contact The Academy.