Situated just a few minutes outside Santa Fe where piñon, juniper and arroyos dominate the landscape, the Academy is like an oasis, especially now after an unusually wet winter and spring. Eight years after moving to Seton Village, the cottonwoods are taller, the wild flowers wilder, and the orchard lusher. The warmer weather draws us away from our desks to the lovely outside spaces, and sometimes, to our surprise, we meet unlikely neighbors like deer, coyotes, raptors and reptiles.

The relatively recent natural history of this land is marked by the humans that inhabited it. Just two-and-a-half miles to the northwest of the Academy lies the site of Arroyo Hondo Pueblo that around 1300 CE was a “pueblo boomtown.” Thanks to favorable climate, it grew from a 100-room hamlet to over 1,000 rooms and ten plazas in just thirty years, but its population all but collapsed ten years later due to severe drought. Later settlements at the site never flourished to the level of the early 1300s.

When Juan de Oñate won the right to settle New Mexico in 1598, he introduced livestock and new plants to the Rio Grande corridor. By the mid 1800s this land was heavily grazed by sheep and cattle. Trade by inhabitants in what is now northern New Mexico with the cultures of Mexico and Central America, however, dates back millennia, as evidenced by chocolate residue found in pottery, jewelry made from shells, and petroglyphs of macaws that still endure on the dark cliffs of La Bajada, just a twenty-minute drive south of Santa Fe.

Here is how our founder, Aaron Stern, described this land when he and his staff arrived:

When the Academy purchased Seton Castle in the spring of 2003, it came with the surrounding 86 acres of land (the last remaining of what had been Seton’s 2500 acres). We immediately began the process of restoring the castle and renewing the land.

The castle itself was in a state of near collapse. The land was littered with garbage. We went to work on many fronts simultaneously. With the help of volunteers from Seton Village and elsewhere in the area, we immediately began to archive and remove the important contents of the building, much of it damaged and mold-ridden, and we placed it in secure storage to protect it from further damage. We began picking up and removing what became some 300,000+ pounds of garbage from the land, with the help of many volunteers. We hired Spears Architects, well known experts in restoration work, to create the plans for the restoration of the building, faithful to its original design; and, in the meantime, we immediately placed and emptied continuously, countless big white buckets throughout the building to catch the incoming rain and prevent further water damage!

Sixteen years later, the Academy’s grounds could evoke the time of the Spanish settlers in the northern Rio Grande Valley. We are surrounded by native and non-native plantings that have set into motion a slow dance of flourishing and contracting with the rhythm of the seasons. This is a fertile little hub in more ways than one.

The regeneration of the soil, nurtured in large part by recycled water from the building, is building climate change resilience. As the blue gramma grass roots grow deeper, carbon sequestration increases. We also have edible landscaping, and what our gardens produce is often transformed into delicious treats for our participants. The greenery has created a micro-climate in a self-reinforcing ecosystem.

Our programs are aligned with this inevitable, emergent ecosystem that humans so often shut out – perhaps because of a fear of the unknown or clinging to the comfort we have upholstered around ourselves. But learning is at its best in a disorienting dilemma. Transformative learning at the Academy does not happen in isolation from the natural world but in concert with it. It is not just the gardener who transforms the garden, but the garden that transforms the gardener. This regenerative, right relationship makes room for plants, animals and sandy arroyos to excite the senses and keep us curious. And we belong in this garden. 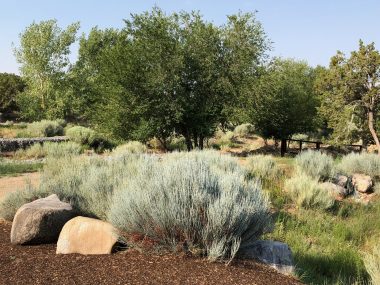 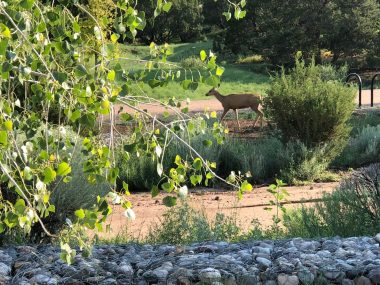 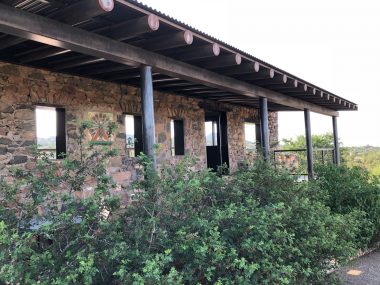 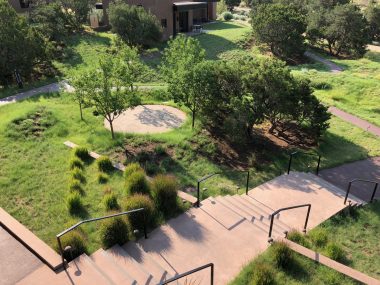